Earlier this year, the Wolves captain was named Football Ally of the Year at the British LGBT Awards, and tells GOAL why equality means so much to him

A favourite topic for social media gossips, football rumour-mongers and shock jock pundits is when a Premier League player will come out as gay, and who it might be.

For Conor Coady, however, it is not a topic for salacious debate – and he wants to change and challenge that attitude.

Earlier this year, Coady was named Football Ally of the Year at the British LGBT Awards, winning a public vote ahead of notable names including Jordan Henderson, Jurgen Klopp and Gary Lineker, following his involvement in a Rainbow Laces event in which he directly stated any player struggling with their sexuality or identity should feel they have a confidante in him.

It is a commitment the England international and Wolves captain forcefully and repeatedly makes in an exclusive chat with GOAL, and says while there may be negativity outside the dressing room about gay footballers, inside it would simply be a non-issue and is something he, and his team-mates, are waiting to celebrate.

Speaking via Zoom from the Wolves training ground, he says: “I can only speak on behalf of being a footballer, and on behalf of the team I am involved in. I’m a fan first and foremost, but it is hard for me to speak about that [media and fan reaction].

“As a footballer, I can say that if anyone wants to come out, wants to speak to me, have a chat about things, then anyone in our dressing room would be open. I have never come across a footballer where this would actually affect them [negatively], if a player wanted to do that.

“By the way, I think the first player to do it would get a reaction, then for me, it would just become everyday life. That’s something everyone is waiting for.”

“Our sport is the best sport in the world, and I honestly believe it should be a sport for everybody”

Men’s football is something of an outlier in world sport by having no major players or figures at the top of the game who are out publicly as LGBT, although Adelaide United star Josh Cavallo provided a beacon in October when he became the only current top-level male professional footballer in the world to come out as gay.

While Cavallo could help others feel more comfortable to be themselves in the game, the list of footballers in the UK who have felt comfortable coming out as gay during their playing career is particularly short.

Former top flight footballer Justin Fashanu came out in 1990 while still playing, but remains the only British player to do so. Ex-Everton and Aston Villa midfielder Thomas Hitzlsperger revealed his sexuality only after retiring, while those within the game who have felt comfortable coming out work in non-league, away from the harshest spotlight.

That is why Coady feels so passionate about equality for LGBT+ people – not necessarily because of any personal connection, but as someone who has lived within and loved football all his life, he cannot bear the idea of anyone not feeling as if the game is for them. 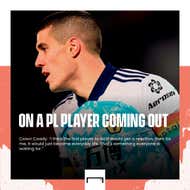 He says: “I’m a big advocate that our sport is the best sport in the world, and I honestly believe it should be a sport for everybody. We should try our best to make everyone feel included, feel as one.

“Equality is a massive word, and when it comes to LGBTQ stuff, I’m big on making people feel involved. If someone wants to enjoy watching or playing football but is not feeling part of it, that would be horrible. The word equality is massive for me, and if I can help anyone in any way possible, that’s a really big part of it.”

Part of England’s squad in their run to the final of Euro 2020 – although he did not play a minute of the tournament – Coady saw at close quarters how Liverpool captain Henderson made his own support for a queer Three Lions fan via social media clear, while squad mate Marcus Rashford’s own social conscience has been on show constantly over the last 18 months.

Speaking with passion and engagement throughout our chat, it is clear how important Coady feels it is that top-level footballers speak out on issues that matter to them, and how this generation of players feel they can lead the way in conversations on matters such as LGBTQ equality – especially thanks to the change in the societal landscape that social media has created.

“Social media plays a massive part these days, it gives you a platform to speak and try to help people. It can go the other way, as we’ve seen with abuse in the last few months, but from footballers to the public, to people in the LGBTQ community, it is a massive part of trying to help” he says.

“Footballers have noticed now they can use their platform to try and help as much as possible, and that’s just what we’re all trying to do. Ask any footballer in the world, and I think they would say they would help if they can.”

One thing Coady is clear on is that a gay footballer should not only be supported if he plays well – and that any downturn in form should not open the door for homophobic criticism or abuse.

Much of the qualified support from pundits has been predicated on the idea that any gay footballer would be backed by their team-mates as long as performances on the pitch are maintained, while Collin Martin, who plays for USL Championship side San Diego Loyal, admitted last year to GOAL that his form suffered after coming out due to the pressure placed upon him.

Coady says: “That to me is wrong, every single one of us goes through a downturn in form at some point in our careers, more than once, so that is something I don’t agree with at all.

“The big thing for me is to be there for anyone who wants to come out, and once they’re out that’s that, it’s normal, it’s life. You don’t then associate that with playing ability, you associate that with your team and working as hard for them as they do for you.

“Every one of us goes through bad form and it has nothing to do with sexuality, to say otherwise is daft, and that [criticising a player based on their sexuality] would never be the case within our dressing room.” 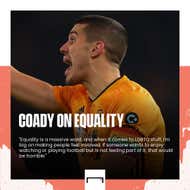 While English men’s football still treats homosexuality as something of a taboo subject, the women’s game – notably the Women’s Super League – features countless examples of LGBT stars at the height of their playing career, from Pernille Harder to Sam Kerr.

For Coady, this normality is exactly what should be aimed for – and the insistence from some quarters that it would be impossible due to the larger focus and coverage of the men’s game is a source of genuine annoyance for him and other allies within football.

“There’s a lot to be admired about the women’s game and how it has developed over the last few years. That’s the biggest thing we can take, how normal it is [to be an out LGBT player]. I get asked the question all the time, and I laugh, because within our dressing room it gets to you a bit that people make an issue of these things.

“There’s a lot we can learn from the women’s game, from how normal these situations are, and that’s where we need to get to in the men’s game.”

Coady also says the sport should make sure transgender footballers are given fair opportunities to play the game, following the recent release of a controversial and much-criticised report by the UK Sports Councils Equality Group which suggested inclusion of trans people in non-elite sport was “incompatable” with fairness.

Coady said: “Football is a game that should be for everyone. It is the most exciting sport in the world, and should be enjoyed by absolutely everybody.

“People a lot more important will be having discussions above me, but being a footballer, the biggest thing is that we want everyone to enjoy the game that we love. Football is for everyone who wants to be involved, and I will never go away from that on that matter, or any matter.”

While Coady received his Football Ally award through his involvement in Rainbow Laces, he does not feel the annual events and discussions do enough – and that he would be proud to wear the rainbow colours on his captain’s armband all season.

He says: “We obviously do Rainbow Laces once a year, once a season we wear the captain’s armband and people talk a lot more. We can do more of that, week in week out, instead of once a season.

“It’s hard for me to come up with ideas as I’m not in charge, but the stuff we do already is good, and we can always do more for helping LGBTQ people.”